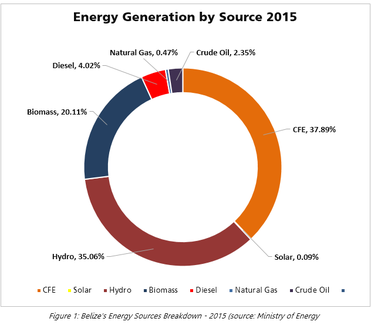 Global discussions revolving around “Climate Change” have garnered incremental emphases in recent years. The impacts stemming from Climate Change have also become ever apparent – from an increase in the occurrence and intensity of hurricanes to a rise in the sea level, including various other intensified natural disasters alike. In the ongoing global quest to mitigating climate change, Belize remains an active supporter joining the chorus of sustainable developments. In line with the aim for long-term prosperity, Belize is also striving vigorously on the path to energy independence, with dedicated emphases on reducing carbon footprints where possible – the answer to this… the movement toward a realm powered by renewable energy!


Figure 1: Belize's Energy Sources Breakdown - 2015 (source: Ministry of Energy
​
With a history of development in Green economy, Belize has been powered by primarily renewable sources, namely Hydro Energy and Biomass Energy. The Government, having endorsed the National Energy Policy Framework, is poised to continue the push for renewable ventures, for the ultimate benefit of achieving 89% energy efficiency and thus reducing its dependence on imported fossil-derivative energy. The country is very much committed to foster interests in the fields of Biomass, Hydro, Solar and Wind.


Investment Opportunities
As a nation with abundant land resources, there is considerable potential to nurture a variety of renewable ventures, such as the development of biomass energy through the burning of sugar cane by-product — the bagasse. Besides, Belize is favorably positioned to opportunity seekers with interests in cashing out of the sun (Solar Power), the water (Hydro Power), and the wind (Wind Power) resources:
Biomass Power refers to converting plants or plant derivatives, such as the by-products, to produce heat or for processing into various forms of biofuels. The current BELCOGEN co-generation plant processes sugar cane bagasse to generate electricity (estimated at 10 MW) to power its milling facility. The surplus of power is then supplied to the country’s national grid for the consumption of the populace. Given the abundance in the land resource, there exists ample potential to further develop the Biomass potential utilizing other plant derivatives, such as bamboos, and rice husks. By the same token, there exists potential in producing ethanol to complement the volatile fossil fuels, as well as producing bio-diesel using proven plants, such as Jatropha Curcas. In summary, there is endless potential to reap renewable energy from Biomass.

Wind Power refers to using wind turbines to generate electricity. As an example, according to the Central America Wind Resource Map, it was estimated that Belize has approximately 3,500 square miles of offshore marine water area with moderate-to-excellent wind resource up to 70 miles off the coastline. It was also noted that the Baldy Beacon area in the Cayo District bears wind potential of seven (7) m/s, which can generate in the range of 20 MW[1]. (source: Belize National Energy Policy Framework 2011)

Solar Power refers to the capturing and conversion of sunlight to generate electricity. According to the Central America Solar Map, about 65% of Belize’s land area receives 5.0 to 5.5 Kilowatt hours (KWh) per square meter of sunshine per day (source: Belize National Energy Policy Framework 2011). To put this in context, using a 60-watt light bulb for one hour would consume 0.06 kilowatt hours of energy. By the same token, 5.0 KWh would allow for at least 83 hours of energy for this light bulb.
Hydro Power refers to using water to generate electricity. In 1990, a comprehensive study of Belize’s hydro-electric power potential was commissioned by Belize Electricity Limited (BEL), and conducted by a Canadian consulting firm. At that time, the consultant found that Belize had approximately 70 MW of developable hydro potential, capable of yielding 330,000 MWh of annual energy. (source: Belize National Energy Policy Framework 2011) As of 2012, forty (40) percent of the country’s overall electricity consumption was powered by Hydro sources (a total of four dams). It was noted further that two other river sites also bear notable Hydro potential: Chalillo Two (estimated at 16 MW) and Vaca Two (estimated at 5 MW).

In an era when the fossil fuel source continues to hit record-high price, Belize is well-positioned to harness extensive breeds of renewable, and greener energy sources that are sustainable for the longer-term — such is also the key to long-term prosperity!


[1]Launchpad Consulting, 2003: Energy for Sustainable Development-Toward a National Energy Strategy for Belize-Energy Sector Diagnostic
A statutory body of the Ministry of Finance, Economic Development & Investment of the Government of Belize
© COPYRIGHT 2019. ALL RIGHTS RESERVED.